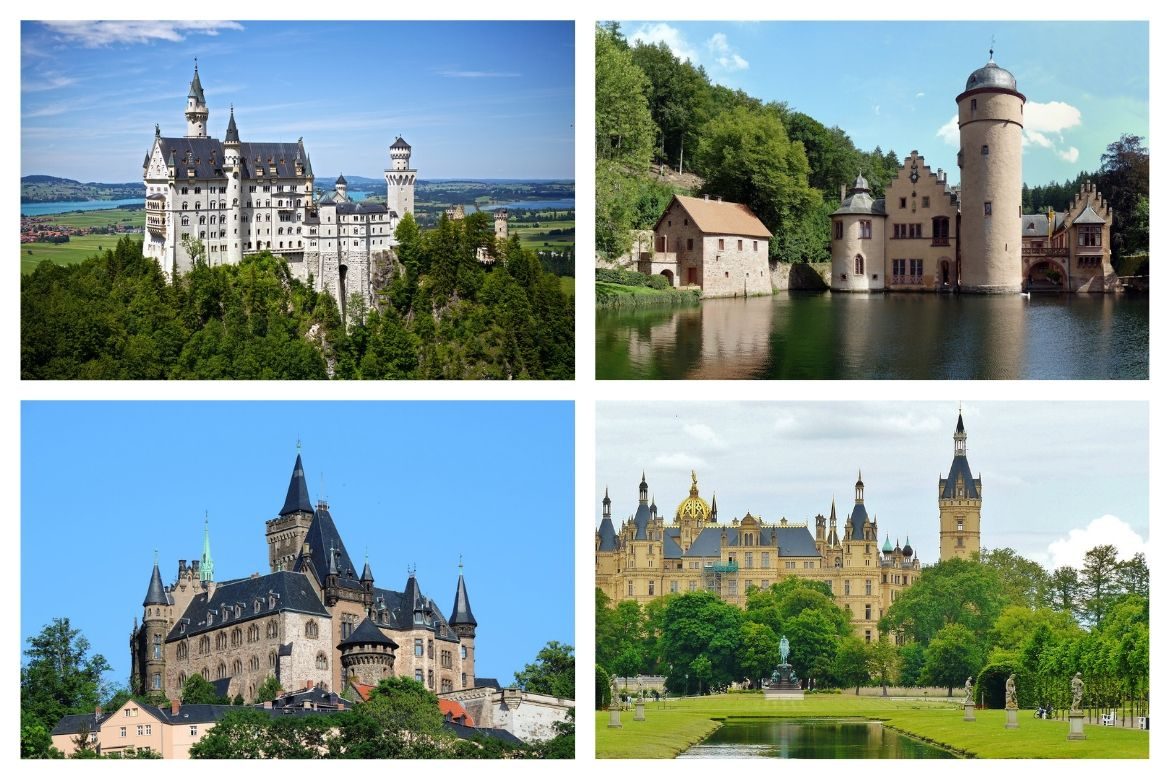 Germany is a nation surrounded by beauty and rich in history. So it should come as no surprise why many great fairytales and lore come from this beautiful country, considering the history it has to inspire them. A large part of that history were the monarchies that ruled before Germany was known as Germany. All these powerful royal families and their large estates created some of the world’s most beautiful castles that have ever been built. Thanks to much of Germany’s success, many have been maintained and restored to preserve their great history. You can truly find some of the best castles in Germany!

Wondering how many castles are in Germany? Because of Germany’s long history, the country has over 20,000 castles to visit! If that number sounds high, that’s because it is and you’re completely welcome to let your jaw hit the floor. While there are numerous castles to see and indulge in, this list does it’s best to limit it to the best 12 castles in Germany to visit!

The List of castles in Germany covered in this article:

Note: All costs for tickets listed are for adult admission.

12 Top castles to see in Germany

The inspiration for Disney’s Sleeping Beauty Castle, Neuschwanstein is a magnificent jewel standing on the edge of the mountains south of Munich. It’s not just one of the best castles to see in Germany, but one of the most magical.

Originally a fortress for the Knights of Schwangau, it was later left to ruin, and Bavarian King Ludwig II grew up on the hill below. Through inspiration and a childhood dream, Ludwig II would make it his endeavor to build the Neuschwanstein Castle and revitalize what was once ruins. More information here.

I would suggest for you to book this great full day tour from Munich to Neuschwanstein Castle. You Welcome!

A top of hill in the German countryside, Hohenzollern is a spectacle to see with its beautiful architecture and medieval feel. Roughly 800 years have passed since the castles original construction and it’s still owned by the same Prussian Royal Family today as it was then.

The castle has a lot more to it than it appears as there are many areas on the inside to explore, so be sure to dedicate some time to walking around.

The castle’s construction began in 1196 and has had an exciting history since. A favorite of Roman Emperor Rupert III and a landmark during the Renaissance, the Heidelberg Castle has been one of constant envy. That was until it was struck by lightning in 1537 and the upper level of the castle burned down. Thankfully, the lower half of the castle survived the lightning strike but was later besieged by the French during the War of the Grand Alliance.

Just as the castle was making a comeback and the lower levels had been rebuilt, it was struck by lightning again in 1764 and badly damaged in the fire that ensued. On top of the battering the castle took and its history, a staple of visiting is also seeing the world’s largest wine vat, a 23-foot-tall wooden barrel capable of holding 58,000 gallons of wine.

Recommended: Top things to do in Belgium in one day written by a Belgian

Just on the edge of the Swabian Alps, Lichtenstein Castle is a perfect glance into Germany’s past as far back as 1100 AD. It’s noticeable for its signature gothic style atop a cliff overlooking a valley below. Also, if you’re looking to see a few castles in one day, then Hohenzollern is only 25 minutes away from Lichtenstein.

Schweriner Castle looks like something out of a fairytale. Surrounded by lakes and woodlands, the castle is a landmark for the town of Schwerin with flush gardens and a refreshing atmosphere. This castle costs a little more than some of the others on the list, but that’s easily excusable when you see what it offers. Unlike many castles, this one is not in ruins and is readily maintained. Honestly, the castle looks more akin to a billionaire’s mansion today than an older castle.

Suggested: The perfect 3 days in Amsterdam

Like most of the castles before, the Reichsburg Cochem is perched atop a hill overlooking its small town below. It’s also not the largest on our list, but it’s pleasingly well organized. Visiting some castles can be tedious to try and see everything without back tracking and getting a little lost sometimes. The Cochem castle can be explored easily without much confusion.

One of Germany’s best-preserved castles, Burg Eltz sits west of Frankfurt and south of Cologne. You can take a private road to the castle or take the much more scenic walk through the forest. Regardless of how you get to the front door, you’re in for a treat! Also, make sure you visit between April 1st and November 1st, as those are the only dates the castle is accessible to tourists.

Another Favorite: Visiting Berlin for the first time? All you need to know

This castle may be a little closer to home in what you picture of a medieval castle. Having a functional drawbridge and the all too familiar medieval architecture, Burg Rheinstein is the picture-perfect example of a castle. The courtyard of the castle offers beautiful views, a garden of burgundy grape vines, and an aroma to match its majestic feel. While not the biggest castle on this list, it’s worth the visit.

It’s difficult to not sound repetitive when describing many of these castles, because most of them genuinely remind you of a fairytale. Sigmaringen Castle is no exception as it dominates the view above the town Sigmaringen. This castle has passed through the hands of numerous families throughout history. Despite its near constant change of hand, its beauty has carried on. The biggest drawback this castle faced was a horrific fire and was later rebuilt in 1893.

What some might mistake for a wizard’s castle, the local German’s call Drachenburg Castle. An admirable castle with pointed spires and smaller stature, this castle easily impresses. It doesn’t match up in size to some of the others on this list, but the architecture alone is worth seeing in person.

What was once a simple home in the early 1400s, has grown into a small castle in the Spessart forest. This castle fits a common stereotype of castles in the movies, as its sporting a fancy moat! From the right angle, the castle looks like it’s floating on the water, making it an interesting site to see. The Mespelbrunn is also a fairly small castle in comparison, so I’d plan to see other neighboring sites to make the most of the time there.

A mix of multiple styles of architecture, the Wernigerode castle has kept bits and pieces of its changes throughout history. Standing over the town of Wernigerode, the castle has quite a bit to see, offering tours through the furnished quarters of the once German nobility. Even if you don’t make it inside to much of the living areas, even the courtyard and outside areas make you feel as though you’ve taken a step through time. One of the best parts of the trip is that after exploring a medieval German castle, you can grab a delicious bite to eat at the town below and continue seeing some of Germany’s best architecture the country has to offer.

Touring Germany is a treat no matter where you go, especially since there’s so much history. It doesn’t matter if you’re into skiing, sightseeing, or climbing the highest mountain in the country, Germany has something to offer for you!

This is a guest post by: Casey from ViraFlare

About the Author: Casey LaClair is a 27-year-old travel enthusiast. Having a career in Satellite Communications and pursuing a degree in Computer Science, most of his time is spent hunkered over a keyboard. This love of technology and travel led him to create (ViraFlare) to spread his joy of travel and help others find their way on the road. You can follow Casey’s Pinterest account for more travel inspiration.

Enjoyed reading this? Save it for later on Pinterest!

Solo Travel in Myanmar: Is it safe traveling or backpacking in Myanmar as a female?

One bag travel tips: How to pack light if you are a stylish traveler

The Best Temples in Bagan in Two Days:...

Best paragliding in the world - Top spots to have a great paragliding experience! - Dreams in Heels - Travel and Lifestyle Blog by a Latina Abroad August 27, 2019 - 10:29 am

Reply
3 days in Istanbul Itinerary: Best places to visit in Istanbul in only 3 days - Dreams in Heels - Travel and Lifestyle Blog by a Latina Abroad September 2, 2019 - 5:56 pm