Top Things To Do in Oman travel guide: A 5-day itinerary across Northern Oman 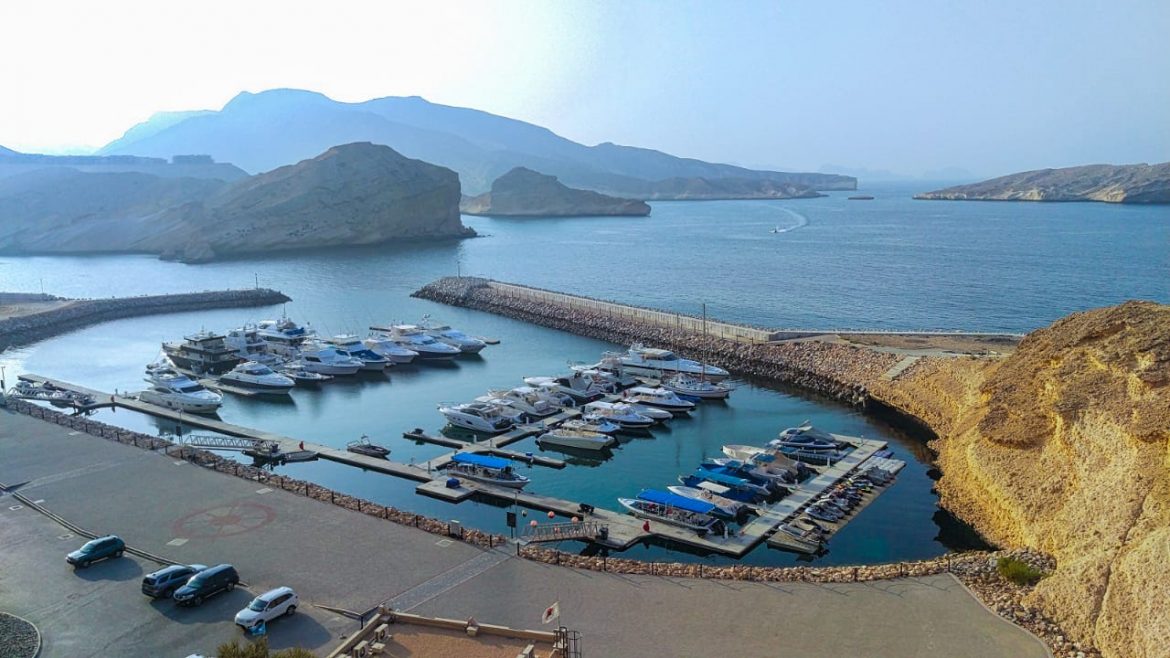 Oman in the Middle East is one of the most naturally and culturally diverse countries. Still not very popular Middle Eastern destinations among the tourists, Oman is gradually making its mark on the world tourism map. There are a lot of different kinds of things to do in Oman. The country is home to a long stretch of a 3000 km coastline, the highest peak in the Arabian Peninsula, and centuries-old history of the Frankincense civilization. In this Oman travel Guide you will find plenty of useful tips for a memorable Northern Oman Trip.

The best way to explore the abundance of natural beauty and culturally rich sites and monuments of Oman is by either going for a self-drive journey across the country, by renting out a car or hiring a driver.

Northern Oman is the most naturally diverse region of the country. From linking to the Arabian Sea to having the mountain range with the highest peak in the Arabian Peninsula to the second largest desert of the country, this region has it all!

In this post, I’m going to share a 5-day itinerary of exploring the beauty of northern Oman.

Where to stay in Oman

Oman offers different kind of accommodations for travelers. Something to keep in mind though, is that since there is no concept of hostels in Oman, therefore, even the boutique hotels might not be very pocket-friendly for the budget travelers.

Below I listed some options for different budgets.

The capital port city of Muscat is an urbanized city with touches of Arabian heritage widely visible throughout the city. Unlike its more famous neighbor Dubai, the skyline of Muscat does not have a single skyscraper.

The city is considered to be laid-back yet modern while sticking to its Bedouin values and Arabic heritage and culture. Lying across the Arabian Sea, the city of Muscat is the center of arts and culture in the country along with abundant natural beauty, which is hard to find in metropolitan cities.

Start off the day heading to the main monument of Muscat, the Sultan Qaboos Grand Mosque.

The majestic royal mosque lies right in the heart of the city and it has opened its doors for people coming from all religious backgrounds.

The Sultan Qaboos Grand Mosque, named after the ruling king of Oman is the biggest and the most lavish mosque in the country. Made up with white marbles, the mosque is located right in the heart of the city.

The main praying hall in the mosque hangs the world’s largest chandelier, which is fourteen meters long. There are small chandeliers hung all across the mosque. The mosque is surrounded by five minarets that guard the main dome of the mosque.

The Royal Opera House of Muscat is the main center of arts and culture in Oman. The opera house is a marvelous white complex with gardens and auditoriums for different arts and culture-related events.

The venue is used for local as well as international cultural events. Visitors are welcome even if they are not attending any show in the opera house.

The entire space speaks for Arabesque architecture from every corner of the complex. The place gets even more picturesque after the sunset.

On special occasions such as Eid or the National Day of Oman, free laser light shows are conducted at the Royal Opera house Muscat. It is also a great spot for photographing at the golden hour.

The Muttrah Fort is a 16th-century fort, which built by the Portuguese sailors who landed on the port city for the purpose of trade. The fort was built to guard the port area and trade ships used by the Portuguese.

It is built on top of a cliff facing the Arabian Sea and the beautiful Muttrah Corniche, which is a 5km long walkway along the sea. The port is made up of limestone rock and stone, which is abundantly found on the Omani soil.

There are hidden chambers inside the port, which were built for the people to escape in case of an attack. There are a total of three viewpoints at different levels on the port.

The top viewpoint gives magnificent views of the Corniche road running alongside the Arabian Sea. The fort has been recently renovated and the entry fee has been removed.

After exploring the main sites and Muscat attractions, start off day two with a hearty breakfast at Shakespeare and Co. restaurant at Al-Mouj Muscat. It is a vibrant marine area with a mall and a food street.

It is famous for its healthy coral reef protection and diverse marine life which is not to be found anywhere else in the Middle Eastern waters. The island is just a short thirty minutes speed boat ride away and offers many snorkeling, diving, and swimming opportunities.

The best way to end an eventful and tiring day is by having dinner in a pleasant environment. When in Muscat, Lover’s Road offers the best pleasant ambiance to unwind and relax within nature.

Day – 3 Arabian and Cultural side of Nothern Oman

Two days of exploring Muscat, now it is time to get beyond the boundaries of the city and experience the more Arabian and cultural side of northern Oman.

To get up and close with the highly rich culture of Oman, a trip to Nizwa is a definite must thing to do, as the city is the unofficial culturally center of Oman.

Just a short two and a half-hour drive away from the capital city of Muscat, Nizwa is famous for its traditional old ‘souq’ (meaning old market). All sorts of Omani traditional accessories, attires and handicrafts can be found in the Nizwa Souq crafted with love by the locals of the city.

Note: You can book a full day Nizwa Tour from Muscat here.

After a shop and stroll around the Nizwa Souq, head on to the Bahla fort which is a UNESCO World Heritage Site. The Bahla Fort is a 15th-century fort which was built by the then ruling tribe of the city, the Banu Nehban tribe.

Now the port stands at its place, well maintained by the government, and it is a great place to learn about the history of Nizwa and the tribal ruling system of Oman.

Another favorite: Solo Females Can Travel To Turkey: What You Need To Know Before You Visit

The Jebal Shams Mountain in Oman is a part of the Al Hajar Mountain range and it is the highest peak in the Arabian Peninsula standing at 3000 meters above the sea level.

It attracts lots of local trekkers and adventure-seekers from the neighboring countries; however, despite being a great trekking trail, the mountain has still not gained enough popularity in the region.

Alternatively, it can also be reached by an adventurous one-hour off-road drive on the mountain.

This day in the Oman trip will be a long driving day as you will be traveling all the way from the city of Nizwa to Sharqiyah region in the southwest.

As soon as you will be connected to the Amerat road which links the city of Muscat and Nizwa to the Sharqiyah region, there are many natural wonder pit stops on the way.

Bimmah Sinkhole also called as the Hawayat Najam park is a park that has been built around a large sinkhole that was naturally made in the ground.

The sinkhole was made many years ago due to the collapse of a limestone cliff in the area. However, now it is one of the best cliff diving spots in Oman.

The Sinkhole is believed to be a hundred meters deep which is surrounded by cliffs. The emerald water of the sinkhole is also home to the Doctor’s fishes that gives a nice pedicure if you put your feet in the water.

Just after a ten minutes’ drive from the Bimmah Sinkhole is Wadi Shab, which is a natural water spring flowing from the mountains. Wadi means spring in Arabic.

There are two small pools of water and one large pool at Wadi Shab. It is also very famous for cliff diving and swimming. A short stop at this place is a definite must to see the natural water flowing from between the rocky mountains and surrounded by the date trees.

A total of four hours’ drive from the city of Muscat and two hours from Wadi Shab will lead you to the second largest desert in the country, the Wahiba Sands desert.

Located in the Sharqiyah governorate of Oman and also called as the Sharqiyah Sands, the desert is the best place in Oman to take a break from the chaos and the hassle of the city and to relax in the calmness of the lonely desert.

Due to a large number of tourist influx in the area, there are many desert camps in the Wahiba Sands desert. Though independent camping is allowed in the area, it is highly recommended to spend a night in the desert camps which are designed like the Bedouin camps in which the locals in olden days used to live.

Watching the sunset and sunrise from the top of a sand dune is a not to be missed activity while in the Wahiba Sands desert.

Head back to Muscat early in the morning from the Wahiba Sands to catch your flight back to home and wrap up the wonderful trip across northern Oman.

*Note: the Wahiba Sands can be only reached by a 4×4 drive. If you don’t have a 4×4 drive then the desert camps can arrange one for an additional cost.

Author’s bio: Rahma Khan is the blogger behind ‘The Sane Adventurer’, a blog aimed at safe travels and adventures in off the beaten tracks around the world. Rahma is a Pakistani expat born, grown-up and currently living in Oman who calls herself Omani by heart. An engineer by profession and a traveler by passion, Rahma is currently just ten countries old. However, her love for traveling across all the continents is slowly but passionately taking her to new places. She loves nature, adventure, and animals and that’s what she seeks on all of her travels around the globe. You can follow Rahma’s on Instagram and Facebook.

The Best Temples in Bagan in Two Days:...